Socca is a cross between a pancake and a flatbread, made from chickpea flour it is high in protein and fiber. 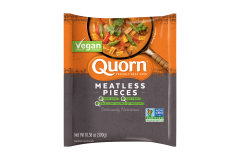 Made with Quorn Vegan Meatless Pieces

Looking for some inspiration?

For a quick and easy meal, use Quorn’s Meatless Grounds to make juicy stuffed peppers packed with flavor.

Enjoy a smoky twist on traditional tacos with this chipotle infused recipe. The chipotle paste, garlic and onion mix...

Channel your inner chef and learn how to make homemade burgers with Quorn Meatless Grounds. Enjoy your favorite meat...

Leave a rating or a review

Leave a star rating or a review for this recipe.

No reviews for this recipe yet.

Save the equivalent in carbon emissions to 20,000 boiling kettles by swapping beef to Quorn Grounds, once a week for a year

The water usage of Quorn Grounds is 10x lower than beef

When you visit our website, we use cookies, which are small pieces of information that allow us to maintain your connection to our website. These cookies are not used to collect or store any personally identifiable information.